Kentarou has brown eyes and blonde hair, the latter dyed as a "gold for a gold medal" symbol. He wears a white shirt, black pants, and a sky blue jacket, though later on he also wears a black and red shirt as well.

Kentarou is observant, deducing that Nagisa appeared to be strained just looking at how she played, and is caring, trying to find someone to join the team that could help her. He can be stubborn when it comes down to it, as shown when he repeatedly tried to get Ayano to join the team even though he was rejected a number of times.

He is also very enthusiastic about producing an Olympic gold medalist since he missed the chance when he injured his leg, ending his badminton career.

Not much is known of Kentarou's badminton abilities, though he is mentioned to have won the Men's Inter High tournament in high school and aimed to participate in the Olympics until a knee injury ended his career. 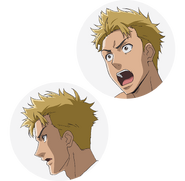 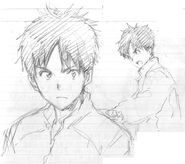 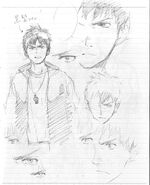 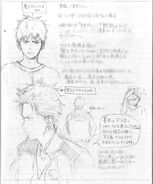 Retrieved from "https://hanebad.fandom.com/wiki/Tachibana_Kentarou?oldid=3106"
Community content is available under CC-BY-SA unless otherwise noted.