Shiwahime Yuika (志波姫 唯華) was the captain and 3rd year member of the Fredericia Girls badminton club. She is also the childhood of Misato Saki.

Yuika has purple eyes and medium length black hair. She usually wears the Fredericia Girls uniform and badminton uniform. When she was a child, she was petite, which she made up for with her technique.

By the time of the epilogue, she has begun wearing glasses.

Yuika has a composed personality and is very caring toward her teammates, considering them to be family, such as when she went to go look for Connie when she disappeared from her dorm. She is intelligent as well, realizing what Ayano was doing and got a decent idea of what her talent was. She is shown from time to time to have sadistic tendencies and likes to tease people or make jokes. She can get annoyed by rude people as shown when she reminded Connie with a threatening smile that she was the captain, calling her girl.

She became interested in Ayano after learning that she had potential sleeping inside of her, and is also stated to feel a little guilty for Rui ending up the way she was, believing that she had overburdened her.

As the captain of the Fre Girls team, Yuika is very attentive of the other members, writing down information and her thoughts about them in her personal notebook, and even asked the coach to have Komachi as her dorm mate to get to know her better to come up with a plan to help her grow.

According to Saki, Yuika usually acts like an old man. She also exhibits some perverted tendencies, such as stating after tickling Komachi that seeing a girl's undefended stomach would make one want to take advantage of it, and touching Komachi's underwear, showing her own as an apology.

Yuika is strong enough to defeat college players and isn't swayed by peoples' opinions. Even with her right shoulder injury, she was still able to reach the best 8 of last year's Inter High, and she had a close match against Connie in the Miyagi Prefectural tournament. She has high technique, a strong mentality, and uses her high badminton IQ and control to attack her opponent where they're the weakest. She is able to analyze her opponent's habits like she did with Ayano. As a part of her strategy, she tends to not play the way her opponents want her to, even if it means losing a point just to throw off her opponent's rhythm.

She is considered to be particularly strong against offensive type players and is a completed control oriented player. As she becomes tenacious in the second half of the match, her opponents are considered to be in a tight spot if they allow her to get a lead in the first half.

According to Saki, when Yuika's doing well, she completely ascertains her opponent and actively goes after them using her wide variety of methods, and the control of the match is always hers. However, when she's not, she accepts her loss and analyzes her opponent to try to control the damage and keeps the same pace. Despite this, she gave her best until the end during her match against Ayano, succeeding in returning her Hulldown Crossfire. 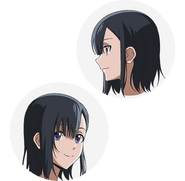 Retrieved from "https://hanebad.fandom.com/wiki/Shiwahime_Yuika?oldid=3127"
Community content is available under CC-BY-SA unless otherwise noted.