Kaoruko is a tall girl with pink eyes and long hair of the same color that she has tied into twin tails. At school, she wears the standard Kounan High uniform.

By the time of the epilogue, she has cut her twin tails to shoulder length.

Kaoruko is a very confident, boastful, and excessively self-conscious, in addition to talking like an ojou-sama. She initially compared to herself to a butterfly, stating that others simply followed her, and added that she didn't have any rivals in the prefectural tournament. Despite this, she is the one who knows Ayano well the most and helped her come to terms with her personality and made her realize that she wanted to be a kind person.

Kaoruko is shown to have feelings for Tachibana Kentarou, mentioning that he was cool.

Kaoruko is a control-oriented player, using data and technique to outsmart her opponent and attack. She is strong mental wise as well, having a hardworking and hate to lose personality, and is good at correcting her mistakes. She is mentioned by Ayano to be strong.

As a middle schooler, she won the middle school prefectural tournament and played in the All Japan middle school tournament. She was also considered a favorite in the Inter High qualifiers but lost to Ayano, later qualifying for the doubles Inter-High partnered with Miki. 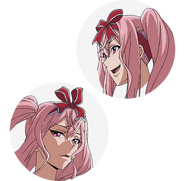 Retrieved from "https://hanebad.fandom.com/wiki/Serigaya_Kaoruko?oldid=3125"
Community content is available under CC-BY-SA unless otherwise noted.