Misato Saki (美里 さき) is a 2nd year member of the Miyagi Sports University and a former 3rd year and vice captain of the Fredericia Girls badminton club. She is Shiwahime Yuika's childhood friend.

Saki has brown eyes and long hair of the same color that she ties in a ponytail.

As the vice captain of the Fredericia Girls badminton club, she supports Yuika in her efforts. Having know her since elementary school, she cares about Yuika as a close friend, rushing to give her advice and to cheer her up when she was losing to Ayano.

She gets along well with her doubles partner Suzu and they are collectively referred to as the Small Girl Doubles (ちびっこダブルス).

Saki is a doubles player partnered with Suzu. Not much is known of their playing style but they were strong enough to win the team Inter High tournament and make it to the doubles final. 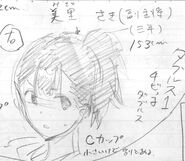 Retrieved from "https://hanebad.fandom.com/wiki/Misato_Saki?oldid=3120"
Community content is available under CC-BY-SA unless otherwise noted.