Mashiko Rui (益子 泪) is a 2nd year college student and a former member of the Utsunomiya Academy badminton club.

Rui has yellow eyes and messy blonde hair, along with a tall and slender body. She wears the Utsunomiya badminton uniform, consisting of a white sleeveless top with a yellow line above her chest and a yellow and white checkered area around her stomach, along with a yellow short skirt with a white line on the front and back of the left side. In her first appearance, she wore what appears to be her school uniform, which is a white shirt and checkered skirt.

As a child, Rui used to have a simple and honest personality and was friendly, though she began to change due to her parents' (particularly her stepmother's) berating over the fact that she never held back against her opponents, being deemed as "crass".

Her personality worsened when she mercilessly crushed her brother while the coach of the school her parents were trying to get him into was watching, though it was revealed that the coach was interested in her and not him. She began to think of herself as her brother, blaming herself, and started to refer to herself as ore (俺) in addition to watashi (私). She was shown to be ill mannered, sprawling herself over chairs when sitting, and became irritated and condescending when a reporter she knew tried to interview her.

During her first appearance she was rude and not interested at all in Ayano, preferring her "Shindou Ayano" persona instead, who she took interest in when she watched her defeat Nagisa the year before. However, near the end of her match against Ayano, it was revealed that she never hated her parents or her brother, stating that she didn't know what to do but speculated that she wanted to be loved more than anyone else, and kept winning because she didn't know why she was playing badminton if she didn't.

Following her loss to Ayano, her personality improved and she began to enjoy badminton again, though she still retains her fascination for "Shindou Ayano". In addition, she stopped referring to herself as ore.

Rui is an incredibly strong player, considered to be one of the big three, and has won the All Japan Junior tournament and international matches. Despite this, she was known to be capricious, losing outright if she felt like it and not because she was lacking in anything. She was considered by Akemi to be a "genius that has never hit a wall", using her height, wingspan, sense, and left handedness to her advantage, and didn't have any distinct weaknesses. 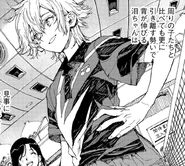