Izumi Riko (泉 理子) is a 2nd year college student and a former member and vice captain of the Kitakomachi badminton club. She is Nagisa's best friend.

Riko has red eyes (purple in the anime and long back hair that she has tied in a ponytail. She also has two side bangs that reaches down her shoulders and she wears red squared glasses.

By the epilogue, she has began tying her hair into a bun while wearing casual clothing as well.

Riko is like the mother of the Kitakomachi badminton club, worrying about its members, as she did with Nagisa when she was in her slump, and mediates between members, informing Nagisa that Ayano was weak to skinship. Her personality stems from the fact that she takes care of her four younger siblings because their mother works late.

Riko plays a control centric style, using her analytical ability and proper judgement to figure out where she could get past opponents and how to make them miss their own shots. She often plays doubles with Ayano. Originally, she didn't think she was that good at badminton, though once she developed her own style, she was able to defeat Emi, who was considered to be on par with Nozomi. However, she seems to be weak to players who use the same style as her own such as Nozomi and Kaoruko. 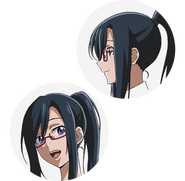 Retrieved from "https://hanebad.fandom.com/wiki/Izumi_Riko?oldid=3117"
Community content is available under CC-BY-SA unless otherwise noted.