Nozomi has brown eyes and long black hair that she has tied in a bun on top of her head, held together by a hair accessory reminiscent of chopsticks. In official matches, she wears the Zushi uniform, consisting of a black and white uniform with velvet colors and a black skirt with velvet lines down the sides.

By the epilogue, she cut her bags shorter.

Nozomi is a control oriented player, using her flexible wrist and her racket control to her advantage. Up until her match with Nagisa, she was forced to obey her coach's orders, but began playing the badminton she wanted partway through and following her defeat, though she is still somewhat dependent on his advice. 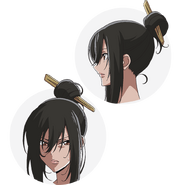 Retrieved from "https://hanebad.fandom.com/wiki/Ishizawa_Nozomi?oldid=3022"
Community content is available under CC-BY-SA unless otherwise noted.