Sora is a doubles player partnered with Yuu. Originally, the two struggled in official matches due to being bad at spatial awareness as Kentarou took care of it during practice, though they later improved. Nevertheless, they still weren't strong enough to win against strong teams like Yokohama Shouei. 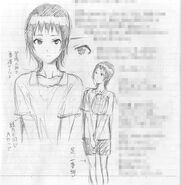 Retrieved from "https://hanebad.fandom.com/wiki/Isehara_Sora?oldid=3116"
Community content is available under CC-BY-SA unless otherwise noted.