Uchika looked like an older version of Ayano, with brown eyes and long back hair tied in the back with a piece of white cloth similar to her daughter. She wore a white top, black pants, and an orange jacket.

Following the events of the Inter High, she began tying all of her back, getting rid of the bangs on the side and having only a ponytail.

Originally, she had no intention of making her daughter into a badminton player, but came up with her "geniuses can be created" theory when she realized her daughter's talent and coached her. However, after seeing Ayano lose to Kaoruko, she decided that it wasn't good for Ayano to be dependent on her and left the house after discussing it with her husband's parents.

After coming back to Japan, she avoided meeting Ayano out of embarrassment and a sense of guilt, leaving her letters instead, which contributed to the latter disowning her. Despite acting like she was fine, Yuika noted that Uchika seemed saddened by this development. Due to this, she realized that she'd been wrong, and became conflicted, later deciding to become a better person after talking it over with Miyako.

It was later revealed that she has been diagnosed with cancer and her condition had been worsening, her limit being the end of the Inter High tournament. She later died on December 29, 2016 according to the date on her tombstone.

Not much was known about Uchika's playing style but she was strong enough to win the All Japan Badminton tournament 10 years in a row which was considered to be an amazing feat. She trained hard to keep on winning, and according to Akemi, Uchika was the first one to arrive at the gym and the last to leave. 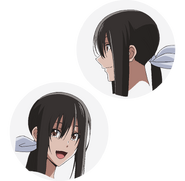 Retrieved from "https://hanebad.fandom.com/wiki/Hanesaki_Uchika?oldid=3113"
Community content is available under CC-BY-SA unless otherwise noted.