Ayano is a short girl with green eyes and long brown hair that she ties together with a handkerchief similar to her mother, though she originally used a hairband. At school, she wears the standard Kitakomachi High uniform with a red ribbon indicating that she is a first year.

During practice, she wears a white shirt and dark shorts. In official matches, she wears the current Kitakomachi uniform consisting of a blue one piece with white and black details. Kitakomachi is written at the back in white kanji.

In middle school, she was a bit shorter than Kaoruko.

As a child, Ayano was happy due to being able to play badminton with her mother. However, once her mother left her in order to make her stronger, her attitude worsened, and at the same time gained a dislike for Kaoruko and herself, believing that her mother had disappeared because she lost. She became disinterested in things and was emotionless when defeating opponents such as Nagisa, but eventually stopped playing before the junior tournament the previous year.

Due to Erena's constant babying, Ayano subsequently turned into a carefree and timid girl, nevertheless her suppressed personality returned once she began playing again, becoming prideful and looking down on opponents. During her match with Nagisa, she considers badminton to be fun again, but still struggles with relationships. She began to go all out in her matches, and tried to follow Kentarou's advice of respecting the sport, but didn't know what to do when she heard a spectator mention that they felt sorry for her opponent. During her practice match with Kaoruko, she was able to come to terms with herself and realized that she wanted to become a kind person. On the other hand, this also caused her to unconsciously start holding back during her matches and it was only during match with Rui that she realized it was okay for her to go all-out.

Following this, she decides to win the Inter High tournament as a way of paying her mother back for raising her and begins to think about what her mother did for her rather than why.

Ayano is one of the few people in the series that are able to play using both hands, giving her an edge over most opponents. She is a defensive player, skilled at continuing rallies, has high agility, and is good at determining whether a shot is out or not along with being able to read the situation. She instinctively attacks her opponent in places they're weak in and is good at attacking them mentally as well, robbing them of their stamina and their ability to think. This proves that her talent exceeds almost all the characters in the series.

She is able to use five different shots from the same form: a shot with high spin that widely changes course, a shot with weak spin that loses speed slightly when it reaches her opponent, a straight smash, a drop shot, and a fifth she learned from Viggo known as the Hull-down Crossfire, which she first used against Rui. Her 2nd shot requires subtle control, and as a result she tenses up before she hits it, allowing her opponent to take advantage of it if they notice it. Her 5th shot is hit just above the net, traveling horizontally, and suddenly drops down near her opponent. It is hard to read the shot because the white shuttle blends in with the white net. Unlike Viggo, she lacks the height and muscle strength to hit the Hull-down Crossfire properly, which she makes up for with a small jump, using the power from the recoil and correct timing to hit it.

She is repeatedly shown to be able to enter a state of extreme concentration in which she senses her opponent's shots, reacting to shots like Yuika's drop fake, which, according to Akane, is something that she's never seen even Rui return properly.

On the other hand, due to her short stature, she is weak in muscular endurance and stamina, and has a habit of shaking her head when she plays unconsciously. She was previously weak mentally as well, being troubled with her own growth as well as her own attitude toward others. Also, despite provoking others, she is weak to them herself, easily reacting when Yuika countered her provocations.

She also can give an intimidating stare and aura to scare off opponents, which happens when she enters a state of extreme concentration or thinking something else bothers her, giving her the advantage in psychological warfare.

By the epilogue, Ayano has won nine consecutive high school titles without suffering a single loss since her match with Aragaki. 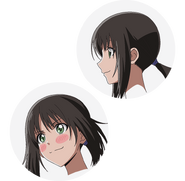 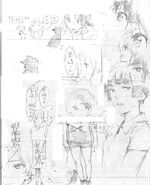 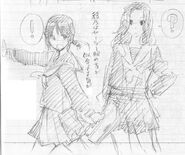 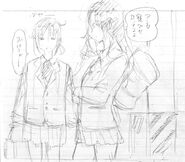 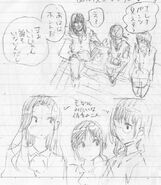