Ebina Yuu (海老名 悠) is a 1st year college student and a former member and captain of the Kitakomachi badminton club. She became the captain after the 3rd years retired in high school.

Yuu is a short girl with brown eyes and medium length hair of the same color that she has tied in a little tail at the top left side of her head. She wears the standard Kitakomachi uniform and club uniform.

By the time of the epilogue, her hair is a little longer and she no longer ties her hair.

Yuu has an energetic personality and is the mood maker of the club. When she became the new captain, she acknowledged that she was still unreliable but would do her best.

Yuu is a doubles player partnered with Sora. Originally, the two struggled in official matches due to being bad at spatial awareness as Kentarou took care of it during practice, though they later improved. Nevertheless, they still weren't strong enough to win against strong teams like Yokohama Shouei. 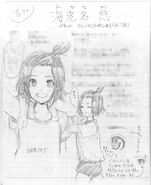 Retrieved from "https://hanebad.fandom.com/wiki/Ebina_Yuu?oldid=3110"
Community content is available under CC-BY-SA unless otherwise noted.