Nagisa is a tall and well endowed girl with brown eyes and short hair of the same color. At school, she wears the standard Kitakomachi High uniform with a blue ribbon indicating that she is a third year.

By the time of the epilogue, her hair is straight, making her look similar to Shiwahime Yuika.

When she was first introduced, Nagisa didn't have a good opinion about Kentarou and was irritable, referring to his methods as half-baked, which stemmed from her slump after being crushed by Ayano the year before. Kentarou described her as being strained. Her attitude worsened when she misunderstood Kentarou's intent toward Ayano, believing herself to be a spoiler, and threatened to leave the club if she lost or have him not talk to her if she won. Although she won the match, she didn't follow through with the bet as she didn't feel like she'd won.

Her animosity toward Kentarou returned when she again felt that she was there to make Ayano look good and threatened to quit, running from practice partway through. Despite this, she was able to get over her slump later that day with his advice during their practice match. She also apologized to her teammates, embarrassed that she'd forgotten the effort they'd all put in because she'd only been thinking about herself, and promised to take them to the nationals.

Nagisa's playing style is offensive based and she uses her jumping smash as a weapon. According to Akemi, her physical abilities are world class, which Viggo confirms. Her body is stated to be unlike that of a Japanese player, being able to jump high enough to surprise the people watching her match including Viggo, along with Connie, who was her opponent at the time. She is also mentally tough, not giving up despite being down 7 points in the second set with the first taken by Connie.

Despite this, she was unable to fully utilize her strengths as she was terrible at determining whether shots were out or not and constantly went after them regardless, which strained her knee due to her height. She was also in a slump due to her shutout loss to Ayano the year before, though she was able to overcome it and her other playing issues thanks to Kentarou's advice. Also, during her match with Connie, being faced by a superior opponent caused Nagisa to learn how to "scheme", now being able to better see whether shots are in or not. 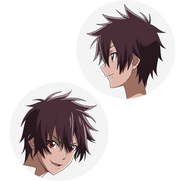 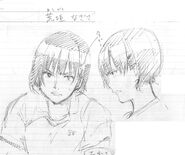 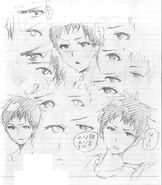 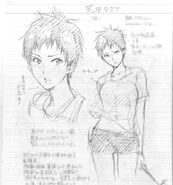 Retrieved from "https://hanebad.fandom.com/wiki/Aragaki_Nagisa?oldid=3107"
Community content is available under CC-BY-SA unless otherwise noted.